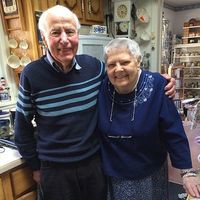 Lakeshore Coin Club founders Bunny and Pat Turner
The story of the Lakeshore Coin Club's founding actually begins with Bunny Turner who owned a coin shop in the Quebec city of Pointe Claire. The year was 1961, and Mrs. Turner's coin shop had just opened. Collectors from around the area would drop into her shop and she began questioning whether they would like to form a coin club. Encouraged by their response, she decided to hold a meeting at her home on Fifth Avenue where those present drafted a constitution, decided on an executive, set dues and picked a date, place and time for an official meeting. The executive elected were Mr. W. Dunford as President, Mr. A. Barnett as Vice President, Mr. I. Dutton as Secretary and Mr. G. Simons as Treasurer. Mr. L. Barton - a longtime collector in the area who often frequented Turner's coin store was named as charter member #I.
The inaugural meeting of the Lakeshore Coin Club was held on February 12th 1962 at the Unitarian Church between Lakeshore Road and Cedar Avenue in Pointe Claire. About 50 people were in attendance. Subsequent meetings featured guest speakers (such as noted numismatists Fred Bowman - a member of the club - and Doug Ferguson), auctions and monthly draws. The club held their first coin exhibition in 1963. In 1967, the club formed a standing display of Canadian coins at Stewart Hall in Pointe Claire.
The Lakeshore Coin Club remains active to this day. Meetings are held on a monthly basis, typically with 30 to 40 members in attendance. Most meetings include a lecture on a new topic, but every year the club holds a bourse night, and auction night, and an end-of-year banquet.

The Lakeshore Coin Club convenes on the third Tuesday of every month from September to November, and from January to May.